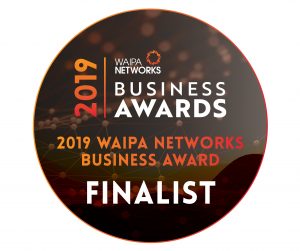 A Te Awamutu family owned and operated build and design company are up for two major awards in this year’s Waipa Network’s Business Awards. Lunix Homes have been named as finalists in two categories; the Excellence in Business (large) category and the Employee of the Year category which the company nominated their project manager Rowdy McIntosh.
“It’s an awesome feeling to be a finalist, this is our first time participating in the awards and the whole process so far has been a great way to reflect on our teams progress in the last year,” said Lunix Homes managing director and owner Tau Haimoana.
Tau started Lunix Homes in 2016 with an associate and is now the sole owner of the company with a team of 12 behind him.
The judges had indicated they were impressed with what the company had achieved in such a short amount of time, notes Tau. Including approximately 38 new house builds in the last financial year and 32 the year before, “we have great working relationships with local developers, suppliers and the community, it is these relationships that have encouraged Lunix Homes growth. I am truly thankful for the support we have and continue to receive” says Tau.
The next big move for the company is a housing development in Hamilton within a build partnership with Waikato Tainui, the subdivision has the capacity for over 50 houses. Lunix Homes are progressing the first 20 builds now.
Rowdy McIntosch the superstar!
Rowdy is a finalist in the Employee of the Year award and has been with Lunix Homes for 18 months and Tau says that Rowdy always goes that extra mile.
“His role is a specialist role and it is rather challenging, you’re needed every single minute and it’s really not for everyone because it is demanding and I don’t know how he does it but he facilitates it really well,” said Tau.
Prior to joining Lunix Homes, Rowdy worked in Hamilton as a builder and decided he wanted to try something different within the industry.
“I wanted to get off the tools and learn more of the office side of things. It’s been amazing working at Lunix, I’ve learnt a lot in a short amount of time and it’s really been a steppingstone as this is a new role,” said Rowdy.
“I’m very humbled to be a finalist, I really wasn’t expecting it but it’s good to be recognised.”